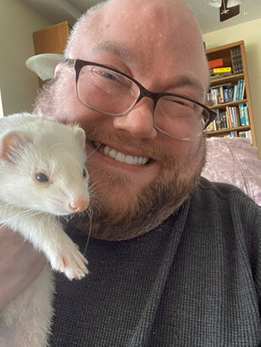 When Zach was diagnosed with myasthenia gravis, he was already, as he puts it, “a professional sick person.” Thanks to a primary immune deficiency and a handful of other medical issues ranging from the common to the complex, he’d had to give up his much-loved career as a UX designer. MG, he thought, was going to be just one more disabling condition to manage, but boy did it turn out to be a big one.

After a certain point, being chronically ill becomes a full-time job. Not a career Zach would recommend: the hours and pay are terrible, you’re on call 24/7, there are a ton of non-reimbursable expenses, it’s incredibly hard on the body, and finding good managers is a crapshoot at best.

Zach’s diagnostic journey to MG was a rocky one, with a series of misdiagnoses along the way. Thanks to the fact that Zach is seronegative—the commonly available blood tests for MG don’t show antibodies—he’s had to endure doubt, skepticism, and frank medical mismanagement. Even with positive electrodiagnostic tests, classic symptoms, and a stellar response to the mainstay MG medication, Mestinon, Zach has struggled with medical gaslighting—doctors insisting he wasn’t experiencing the things he knew he was. For the 10–15% of MG patients who are seronegative, this is a common problem. One he’s passionate about changing.

Fortunately, he’s got an excellent neurologist and a fantastic primary care doctor who are firmly in his corner now, especially since Zach is one of those patients who has difficult-to-manage MG. He’s averaged 2–3 severe exacerbations and hospitalizations a year since diagnosis and relies on crutches or a purple power wheelchair outside the house.

So, faced with the loss of his career, mobility limitations, and the addition of a lot of illness and disruption, Zach made the sensible choice to become a writer. Also a support group leader. He moved to the Portland, OR area about nine months after he was diagnosed, became active with the local MGFA support group, and eventually took on co-leadership of the group, and involvement in regional and national patient advocacy. He was the Portland MG Walk Hero in 2018, and one of the planners of the 2019 Walk, which he ended up having to miss as he was in the hospital with a severe MG flare. Oh, the irony!

Zach shares his accessible home with four beloved and mischievous ferrets. When he isn’t working on MG-related projects and leadership, he enjoys writing fiction, drawing and painting, anime and manga, and playing board games and D&D. In other words, he’s a giant nerd. He’s also a passionate feminist and LGBTQ+ advocate. His superpower is writing haiku on the fly.

Myasthenia
Sounds like a Pokémon name
But don’t collect it!

Click here to read all of Zach's articles on Myasthenia-Gravis.com.

A Different Kind of Prescription