Myasthenia gravis (MG) is a chronic autoimmune disease. Autoimmune means that the body’s immune system cannot tell the difference between healthy cells and invaders like viruses, fungi, or bacteria.

With MG, the body attacks areas where nerves communicate with muscles. This communication is what makes muscles work. Without the ability to communicate properly, the muscles become weak and tire easily.1

One theory is that the thymus goes haywire and tells the immune system to attack parts of the body that control muscles of the eye, face, neck, and upper body. When this happens it may be called thymoma MG.2

The thymus is a small gland that sits just under the breastbone in the upper chest. This gland helps create T cells, which are a type of white blood cell that fights infection. Normally the thymus is large in children since it is busy creating T cells and building the immune system.1 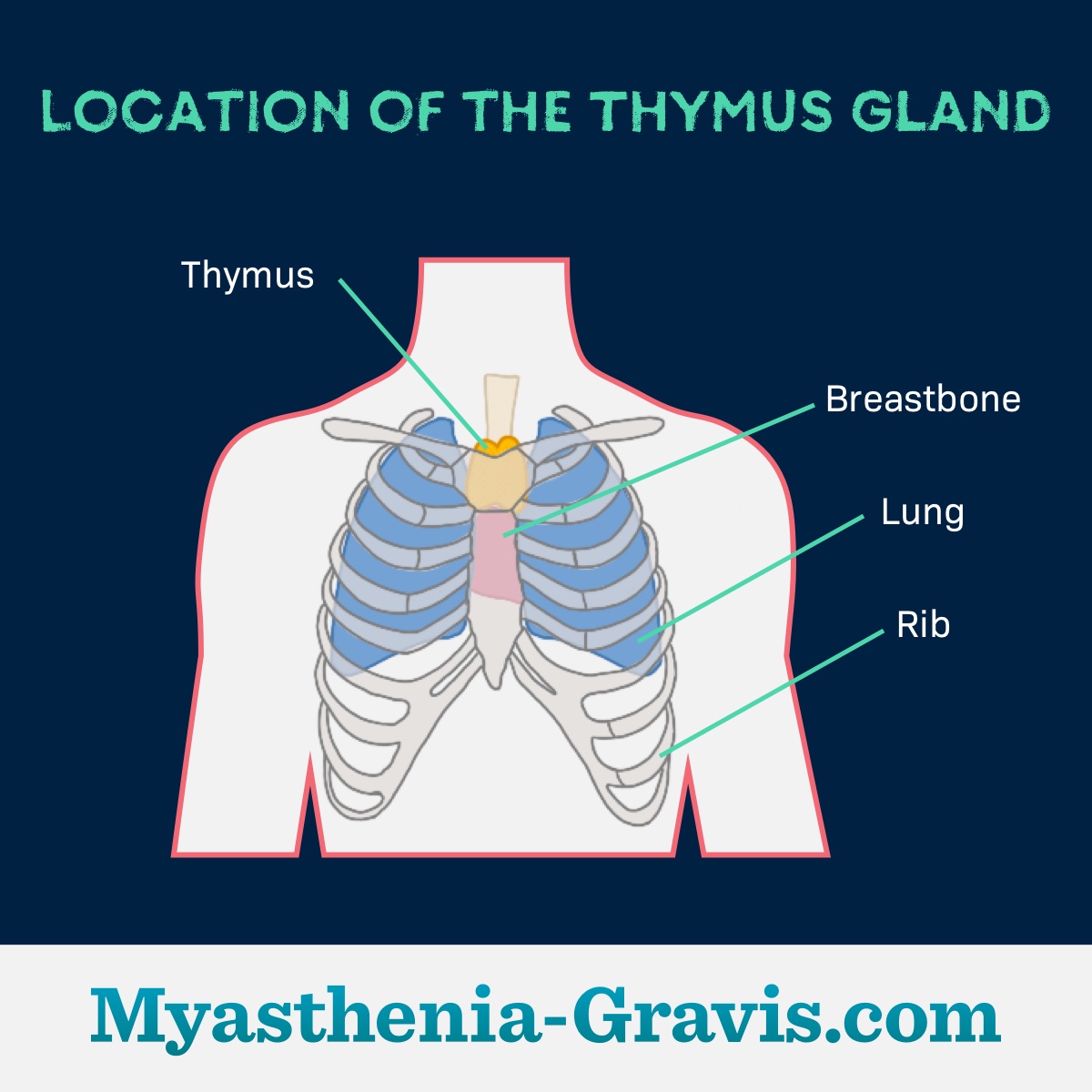 Where is it located?

By the teen years, the immune system matures, and the thymus gets smaller and slowly turns to fat. However, the thymus remains large in many adults with MG.1

Sometimes, tumors can develop from the thymus gland. These tumors are called thymomas. Thymomas can be cancerous or non-cancerous. Up to 15 percent of people with MG will have a thymoma.2

However, some people have a thymoma and do not have myasthenia gravis. About half of people with a thymoma will develop MG.2

How is it diagnosed?

Signs that someone with MG may also have a thymoma include:4

Thymomas are usually found using a chest X-ray, CT scan, or MRI. Every person with MG should have imaging tests to look for a thymoma.4

How is it treated?

Most thymomas are non-cancerous (benign) and can be completely removed with a surgery called a thymectomy. Chemotherapy and radiation may be used to treat cancerous (malignant) thymomas if all of the tissue could not be removed during surgery.5Plasmapheresis and IVIG (intravenous infusion of immunoglobulin) may be given before surgery to prevent serious complications after surgery. Surgery and anesthesia are some of the things that can trigger a myasthenic crisis in people with MG.2

Studies show that people with MG who have a thymectomy do better long-term if they take the steroid prednisone after surgery.6

What Is the Connection Between Pain and Myasthenia Gravis?